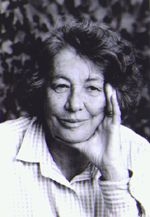 Thea Astley was born in Brisbane and educated at the University of Queensland. She taught in schools until 1967, then Macquarie University between 1968-80. Her novels have attracted wide praise and a number of awards, including four Miles Franklin Awards. In 1989 she won the Patrick White Award and was granted an honorary doctorate from the University of Queensland. She was made AO in 1992 and was made a Creative Fellow of the Australia Council in 1993.

Astley's fiction shows a particular interest in Queensland history and locales, and frequently explores the role of Catholicism in everyday life. The bleak action of her novels often destabilises Australian myths that circulate around the idea of a homogenous male identity. Her works expose injustice and cruelty in Australian life, especially towards Indigenous people, women and the elderly. They amount to a plea for compassion, and for awareness of the needs and suffering of those who are forgotten, marginalised or powerless.

'In the dying town of Drylands, Janet Deakin sells papers to lonely locals. At night, in her flat above the newsagency, she attempts to write a novel for a world in which no one reads—‘full of people, she envisaged, glaring at a screen that glared glassily back.’ Drylands is the story of the townsfolk’s harsh, violent lives. Trenchant and brilliant, Thea Astley’s final novel is a dark portrait of outback Australia in decline.'

'Tracing the lead-up to and aftermath of a bloody showdown when the superintendent of a Queensland mission goes on a murderous rampage.

'In 1930 the superintendent of a mission on a Queensland island, driven mad by his wife’s death, goes on a murderous rampage. Fearing for their lives, the other whites arm a young Indigenous man and order him to shoot Uncle Boss dead.

'The Multiple Effects of Rainshadow traces the lead-up to this bloody showdown and the repercussions in the years after - for Aboriginal people and the colonial overseers.' (Publication summary)

'Australia's acclaimed national treasure delivers two slyly linked novellas - The Genteel Poverty Bus Company and Inventing the Weather - in which "progress" vies unsuccessfully with more feral aspects of an untamed land. When would-be hermit Macintosh Hope, formerly of the Genteel Poverty Bus Company, settles down on a tiny Pacific isle off Australia's coast, he thinks he's found the perfect retreat from the workaday world. And he has - until neighboring Hummock Island is claimed by developer Clifford Truscott as a tourists' paradise. Thus sparks a confrontation pitting the thuggery of progress against the skills and wit of a lone man who proves uncannily adept at remaining the proverbial thorn in the magnate's side. Inventing the Weather finds the same developer's wife fed up and leaving her fatcat husband and their smug, precocious children. Julie Truscott's journey to independence takes her as far as a small mission run by nuns at Bukki Bay. But old ties aren't severed easily, and Clifford soon sets off tremors in the mission community, once he casts a profit-making eye on its enviable spot on the coast. With an unerring sense for language and a shrewd eye for human character and detail, Thea Astley sounds the territory and spirit of her native Gold Coast with the authority of a seasoned denizen of the terrain. ' (Publication summary)