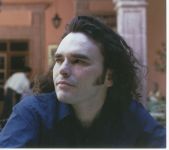 Joel Deane grew up in the Goulburn Valley but returned to the city as an adolescent. At seventeen he became a copyboy at The Sun News-Pictorial, later working as a reporter on the Sun. He also spent some time working as a press secretary for the Australian Labor Party.

He lived in San Francisco between 1995 and 2001, where he worked as a multimedia journalist, editor and producer. He has published poetry and short stories and has performed at Melbourne's La Mama Poetica, the Intersection for the Arts (San Francisco) and the M. H. de Young Museum in San Francisco's Golden Gate Park. Deane has also worked as Premier of Victoria Steve Bracks' speech writer.

'In 2012 poet and writer Joel Deane suffered a stroke. Suddenly he was a poet without language. Year of the Wasp tracks Deane’s journey to rediscover his poetic voice.

From these deeply personal origins Deane’s third poetry collection rises to confront the realities of politics and culture, language and love in contemporary Australia. It is a journey of poetic transfiguration that produces a work of unrivalled power, emotional intensity, and insight.' (Publication summary)

'In his second collection of poetry, Joel Deane strives to find truth in the increasingly inconsistent lives we are living and duplicitous language we are speaking.' (Publication summary)