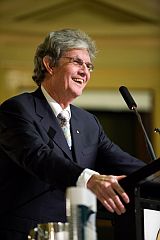 Hay has worked in English and Australian literary studies, including bibliographical research. His work in bibliography began with a study of pre-19th century books in the Library of the Benedictine Monastery at New Norcia in WA (1986). He has edited short story collections and bibliographies of Western Australian writing (1981 and 1990).

Hay was General Editor of The Bibliography of Australian Literature which is produced under the auspices of AustLit. Volumes appeared in 2001, 2004, 2007 and the final volume will be published in 2008.

In 2003, Hay was honoured by Deakin University by naming a major building after him in recognition of his leading role in transforming the derelict woolstore buildings in the city of Geelong, Victoria, into an award-winning university campus. In 2004 he was made a Companion in the Order of Australia (AC) and in 2007 was elected as an honorary Fellow of the Australian Academy of the Humanities.

In 2005, the University of Western Australia awarded John Hay an Honorary Doctor of Letters and in 2007 he was awarded an honorary doctorate by the Queensland University of Technology.

Emeritus Professor John Hay died in Melbourne in November, 2016. A fuller biography can be found here.